Hi Guys, the NBA season is upon us. So I thought I would blog talking all about NBA. What everybody is asking these days is will warriors be able to mesh chemistry-wise? There is no question about it that they have all the talent in the world. But there’s only one basketball to go around between all that talent.

With all that said I do believe they will figure it out, and be the last team standing in June. I saw them play in Vancouver at Rogers Arena for their 1st preseason game of the year which was also Kevin Durant’s debut. I believe the Clippers will have the 2nd best record in the west and make it to the conference finals after years of disappointing playoff performances.  I am bias though mostly because Chris Paul is my favourite player. In the east, it’s the Cavs against their bench. There is nobody on par with them. With that being said, I believe the Celtics will finish with the second best record and I think they will make the conference finals. But let me make one thing clear, it will be a Cavs-Warriors rematch for the third time in a row next June. It’s about time for airlines to start daily nonstop flights from the Bay Area to northeast Ohio!

Below is a picture of me at the Clippers Game in Portland a couple years ago.

Until next time. Happy reading guys! 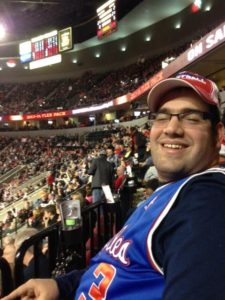 0 replies on “NBA Season is upon us!”